There’s been a rather lengthy conversation come after my Walking With Ghosts story, which mostly didn’t really have anything to do with me, so I’ve just watched it unfold. Towards the end somebody mentioned the book the Te of Piglet. I too read it ages ago, I too like the Tao of Pooh much better. But I also really liked the premise of the title: Te – the virtue, of Piglet – a wee and fragile timid little thing. The virtue of the small.

It’s something I think about a lot these days, for a variety of reasons. But the idea there’s something precious and wonderous about that part of us that is the weakest, the most frail… something so extrodinarily human about that. And so contrary to our desire to be strong, to be in control. 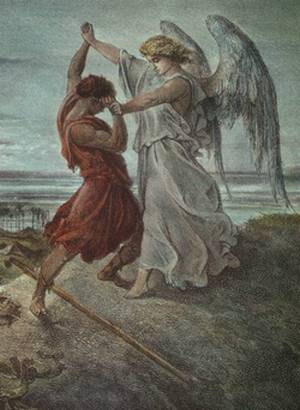 Right beside that dzogchen tantra I keep referring to this week, is a printout of Gustave’s Jacob Wrestling with the Angel. something about the bible story caught me once, about a God being willing to wrestle with you all night when he could take you down at any moment. Gustave’s image really captures it. You can see from the posture of the combatants the angel has the upper hand. It’s the spiritual equivalent of a bully holding on to a weakling’s head while he flails hopelessly. Except, I realize as I type this, there is a strange kind of twisted hope in that fight you can’t win. It’s misguided, but it’s still a kind of hope.

Anyway, that image is up on my door, to remind me daily to let go, to stop fighting. Resistance IS futile. The virtue of the small. It’s an essential part of being human, we’re not going to win. We are frail little creatures with very little power on the grand scale of things. You doubt this? Just run yourself up against a tsunami, or a forest fire, or an oncoming train. Heck just spend a few hours in a nursing home, you’ll see what frail little miracles these bodies of ours are, all the ways they can fail us, all the ways the world can beat us down.

And maybe it’s because there is this Achilles heel to who we are, this underlying weakness we never want to look in the eye, the frailty and impermanence of our existence, maybe that’s what makes our life and our lives all the more precious. We fight against our weakness, but there is an underlying value to our powerlessness. And we fight it, because that’s part of being human too. It’s so hard to embrace our own weakness, to see how we fight against it.

But that fight makes me tired, I’ll like to let it go. Instead, I like this line from a Dan Magan song:  “Try to break up with your pride, start to flirt with satisfied.”

Incidentally, it’s also a small miracle I could pull this post off tonight. I’m really bloody tired. And I think I’d be less tired, if I could just relax and let myself be tired for a while, let myself sleep …and flirt with satisfied.